Access to quality health care in many rural communities in West Virginia would be threatened without an adequate investment to maintain the health care infrastructure and thoughtful policies that are individualized to each community/region’s needs.  The backbone of the rural health system in West Virginia consists of small rural hospitals, community health centers, dental and physician practices, and others operating within an ever-changing environment with respect to health care funding, reimbursement, and regulation.  In most rural communities in West Virginia, the most significant barriers to care include a multitude of financial barriers, lack of transportation, lifestyle and, to some extent, the Appalachian culture of pride and resistance to change.

The closure of Calhoun General Hospital in January 1996, threatened the viability of the health care infrastructure in the region surrounding Calhoun and Gilmer Counties in West

Virginia.  The first many, including state policy makers, became aware of the financial distress of the hospital was when a story of the closure appeared in the Friday edition of the

afternoon newspaper in Charleston, West Virginia.  (Article displayed is from the Calhoun Chronical and not the article that appeared in the Charleston paper) In addition to the story,

the newspaper article also featured a picture of the emergency room door chained closed.  In a rural community, when a hospital closes without planning the entire system begins to

experience challenges, much like a house of cards.  Not only was the hospital closed, but now emergency services needed to come from the neighboring county thus costing more in

mileage and other related costs.  The primary care center, located across the parking lot from the hospital, was seeing its resources stretched due to the higher number and acuity

level of patients being cared for.  Worse yet, on Saturday, after the closure, a woman died in the local grocery store parking lot as emergency services was now coming from the

neighboring county with a much longer response time.

West Virginia is named the "Mountain State" for good reason. The terrain is rugged, curvy and served by two lane roads making travel difficult, especially in severe weather. A trip of

12 miles may take 30 minutes due to the lack of interstates and direct routes.  Although “Wild and Wonderful” West Virginia experiences all four seasons, which creates a not-to-miss travel destination for outdoor sportsmen and enthusiasts, it also creates a variety of weather conditions, such as flooding, snow and ice. These make travel difficult and cause isolation for many residents. Loss of utilities is common and leads to significant health concerns in vulnerable populations, such as the elderly, children and persons with disabilities.

Calhoun and Gilmer Counties are located in central West Virginia. These rural counties do not have many large employers.  Today, Minnie Hamilton Health Systems (MHHS) is the largest employer in Calhoun County and Glenville State College leads employment in Gilmer County.1 The average travel time to work is over thirty minutes.  Patients must travel to a different county to receive many specialty services. Thus, MHHS is an important to the region in that it ensures that primary care services are available locally for residents regardless of ability to pay.

In 1983 Minnie Hamilton Community Health Center was formed, and became a community health center in 1987.  In 1996, the community health center had 12 employees and a $350,000 budget.  The closure of Calhoun General Hospital in 1995 spurred a series of significant efforts to strengthen the health care infrastructure in the region as the nearest hospital was over a 1½ hour drive by ambulance.  Following a series of meetings with community members, staff and board representatives, local providers, federal and state government representatives and consultants, a new model for health care was defined and realized for the region.  Minnie Hamilton Health Care Center, Inc., d.b.a. Minnie Hamilton Health Systems (MHHS) was established, through a “leap of faith”, as a result of a community-driven effort based on the desire to continue quality medical and health care in Calhoun County and the region The mission of MHHS is to improve the health quality of life of all people in the service area through an innovative delivery system of services and education.  Development of the re-created health system was guided by a focus on the needs of residents and businesses in the region.  Today, MHHS is a not-for-profit 501 (c) 3 corporation that is governed by a volunteer Board of Directors.  The health system currently has 275 employees, 12 sites and a $25 million budget.

retained, duplicate services were eliminated and the strengths of both organizations were utilized to form the MHHS known today.  The threat of collapse of the health care system in

The growth of MHHS, continued in December 1997, when the Board of Glenville Health Services, LTD (GHS) and the West Virginia Department of Health and Human Resources,

contacted MHHS to request that MHHS assume management of the primary care center located in Glenville in Gilmer County, as GHS was at risk of closure.  There were no full-time

health care providers in Gilmer County at that time. There was a part-time physician that would not provide care to Medicaid, Medicare or uninsured patients unless they paid cash.

MHHS:  A National Model for the Future

In 2010, MHHS was one of the three examples of successful collaboration described in the HRSA publication "A Manual on Effective Collaboration between Critical Access Hospitals and Federally Qualified Health Center". The manual states that “given the traditional challenges faced by many rural communities relative to lower socio-economic status, higher disease burden, and lower health care reimbursement rates, these key safety net service providers have a responsibility to seriously consider cooperation and collaboration as mechanisms for maximizing the return on investment of the various types of Federal support associated with CAH and Health Center designations ...".

The unemployment rates in 2014 were 9.5% in Calhoun County and 6.3% in Gilmer County.  In January 2017, this had increased to 15.7% for Calhoun County, the highest in the state, and 9.4% for Gilmer County 3. The unemployment rate does not include those who are disillusioned and no longer actively seeking employment.  Recently, the decreasing prices of oil and gas have resulted in loss of employment opportunities.  Companies that are dependent upon oil and gas extraction are reducing staff and shifting services out of the region. In addition, the West Virginia Center for Budget and Policy reports that wages for male workers have not kept up with inflation. All of which makes it harder for working families to make ends meet.

The largest health challenges for MHHS include access to specialists and recruitment and retention of primary care, dental and mental health providers.  MHHS offers a broad range of services through its community health clinics, school-based health centers, oral health services, behavioral health, critical access hospital services and other services.  All allowable services are available on a sliding fee basis which improves financial access to care, even for those with insurance but who cannot afford insurance deductibles.

Staff is trained on cultural competence and is expected to address patients in a manner that is easily understood. This is invaluable when providing care to individuals with disabilities, those with low literacy and with cultural differences.  West Virginia is the only state in the nation that is fully within the Appalachian region. The Appalachian culture is one of strength and a "taking care of our own" attitude, but also results in patients often deferring routine and preventive treatment which increases the use of higher cost alternatives such as emergency rooms. There is a stigma related to seeking mental health services in Appalachian communities and oral health care is not seen as a priority resulting in dental caries, tooth loss and other chronic conditions.

For the board and leadership of Minnie Hamilton Health Systems (MHHS), the journey has been about ensuring access to care.  MHHS has turned an extremely remote location into a community with access to a complete continuum of health care services, with a focus on improving the region’s overall health through the delivery of primary care services.  Through programs aimed at educating patients and preventing disease before it occurs, MHHS saves individuals and the community millions of dollars in treatment costs and lost earnings.  MHHS contributes significantly to the region’s economy, in 2014 the estimated total annual economic impact was over $16,000,000.  Today, MHHS continues to save lives, in a remote rural community in West Virginia that would otherwise be over an hour drive on two-lane, mountainous roads from other health care providers.

However, the MHHS success story is not without its ongoing challenges.  Leadership continues to closely monitor cash flow challenges caused by the potential 330 funding cliff, federal sequestration, PPS, ICD-10, proposed changes to the 340B pharmacy program, changes to DSH payment formulas and uncertainties related to repeal, replace or repair of the ACA.  In addition to challenges posed by federal policy, West Virginia is in the midst of an economic crisis putting intense pressure on the state’s budget which may have financial implications for health care providers in West Virginia.  MHHS’s leadership, as well as other health leaders in West Virginia, continue to monitor changes in HPSA score calculations which could result in more difficult barriers for the recruitment of providers in rural communities throughout the state.  In addition, MHHS finds it difficult to fill many allied health professional positions, such as nursing, lab and other positions.  Finally, the original Calhoun General Hospital was built during the Hill Burton era, thus today the facilities that house MHHS need replacement, which is difficult to afford given other capital needs such as EHR investment and other investments needed to ensure the delivery of high quality care in the region. 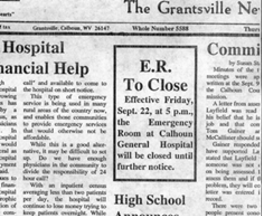 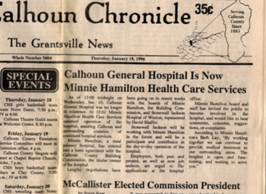 Your partner in health today, tomorrow, and for life.